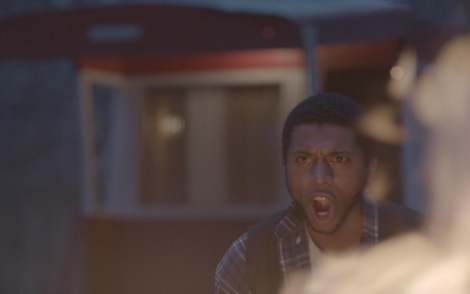 Satanism was never my thing, nor did I ever suffer from any particular fascination with the occult. Call it a suburban problem: the Aleister Crowleys of the world never entered my social sphere except through the modern lit professors I had in college. There were no burn-outs or goths, at least not in big collectives, in my town by the time I finished high school. The mythology of the black-clad devil-worshipper living nearby was not the kind of legend to fear – and therefore, it was hardly interesting to me when I saw it in the flesh.

Yet one of the rare occasions in which there was direct impact to my world occurred in a Physical Education class; and this exact, somber memory returned to me while watching a new film at SXSW this year called The Alchemist Cookbook. The feature’s writer, director, producer, and editor, Joel Potrykus, had a separate project at the festival a couple short years ago called Buzzard. I was anticipating Cookbook as a potential (pardon the language of the trades here) “breakout,” both because it was already prepped for release by Oscilloscope Labs and because tweets from other filmmaker-peers of the director’s had been adulatory. Potrykus’s premise is spare and strong: a delusional amateur chemist is hunting for the proper alchemical formula while living in a meth-ready RV in the woods. His script calls for only two actors, Ty Hickson as the aspiring gold-head and Amari Cheatom (of Shaka King’s Newlyweeds) as his enabling cousin, but I will be damned if its bareness doesn’t work perfectly. Almost. 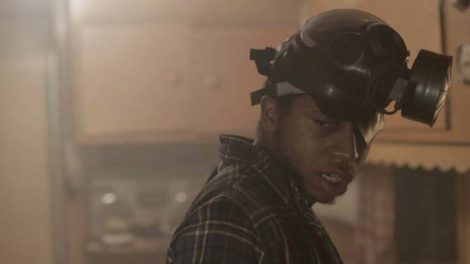 Ultimately, and despite some charmed, rustic, and woodsy photography of Allegan, Michigan by Adam J. Minnick, I did not respond as well to the film as I had hoped for two reasons. I’ll get to the smaller one – Minnick’s and Potrykus’s final shot choice – in a moment. The first and broadest anchor in my highly personalized dissatisfaction with Cookbook was its pulling up of the moment in ninth grade when an anarchic, Pantera-listening punk refused to take off her long-sleeved shirt in P.E. She wasn’t a friend, and was in fact nasty to me because I was a clown, a smart-ass, an obnoxious dynamo – all the symbols of someone desperate for attention, which she was not. She preferred to fade into the background when it was possible, only protesting when it was not. So when the coach forced her to switch shirts, and she became furious, I saw that she was self-immolating under her ragged black clothes. For my classmate, being “satanic” – which she was – became part-and-parcel of being mentally unstable. Or perhaps it was the other way around.

This young woman’s occult obsession became for me then only the clearest element of her general misery; and in Potrykus’s film, the protagonist embodies a similar fixation, one that has pushed him so far from polite society, religion, and suburbanism that his only retreat is to Mephistopheles itself. That association – between isolation and cult fantasy, mental disease and Satan – is an easy one to make in our world, when digital connection between people has led to a widespread love of the same foods, movies, television shows, and photographs of our coffee cups. You wouldn’t catch a Lucifer-lover with a latte.

To see the equation between psychological sickness and the occult in Ty Hickson’s “Sean” feels like a dramatic crutch, a short cut. It collapses the magic-realist fantasia that Potrykus’s direction nearly puts as purely natural. Minnick’s work towards this end cannot be understated. His photography is slow-moving and steady, like a human glance, and the pacing helps to heighten the dread we feel as Sean gets closer to reaching forbidden gold. With its combination of minute motions and opaque, real-or-not specters, Minnick’s work resembles artists’ like Sayombhu Mukdeeprom’s in Uncle Boonmee, where the fourth wall is violated by demonic figures. Only intrusive lapses in the screenplay disrupt these mesmeric moments, as when Sean and Cortez bicker about eggs, medication, or gang threats.

Ah, well, again, almost only: this handsome feature’s ultimate sabotage is its final shot, though I need not describe the shot itself. It is enough to say that Potrykus, as his own editor, chose to smash through his own film’s illusions of reality and to scream, “A film – BY ME!” in closing. The movie is divided into chapters, anyway, so it must have made some sense to create a pulsing, powerful epilogue. But its style and tone belong in another dimension of drama – that is, the universe of supernatural horror – and the juxtaposition between a full feature and one single shot is too severe. While Hickson gives the moment psychological gravity (and in fact, I’ve been meaning to say how fantastic and distracting he and Cheatom are as comic counterparts), it’s too much too late, soiling Potrykus’s previous choices as director/editor in the process.

You can see why, in certain ways, Alchemist Cookbook is an opportunity lost miserably for me. And if that judgement seems harsh in any way, ask yourself this: if you read a new novel from a promising young writer that had a page at the end filled with vulgarities of any kinds – words, images, what have you – wouldn’t you, too, be disappointed? 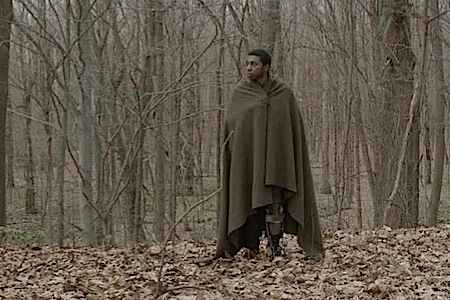