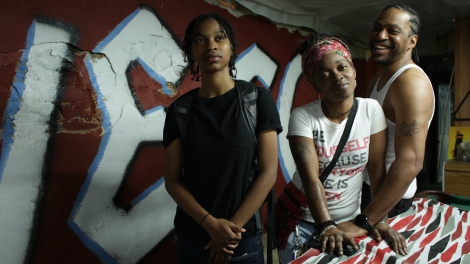 I was not surprised to learn at the end of Jonathan Olshefski’s directorial debut, Quest: the Fury and the Sound, that the film was supported by grants from both the MacArthur Foundation and the Pare Lorentz Documentary Fund. Like Olshefski, Lorentz was a first-time filmmaker when he completed The Plow that Broke the Plains, an essential documentary about the socioeconomic causes and impacts of the Dust Bowl, for the U.S. government. And though his unhindered advocacy on behalf of the American proletarian has been obscured by years of controversy and the national forsaking of FDR’s New Deal legacy, Plow and Lorentz’s other major poetic masterpiece, The River, remain landmarks in the field of Humanist filmmaking.

At the peak of that lineage, we can now place the filmmakers of Quest, a ten-years-in-the-making nonfiction musical about an artistic North Philadelphia family. Christine’a “Ma Quest” Rainey and her husband, Christopher “Quest” Rainey, have two children, a grandchild, and an independent hip-hop studio. They style their kids’ hair, walk them to bus stops, and go to their day jobs; some nights, they record music with their friends. Olshefski, who started shooting the film and recording the sound in 2007, is with the Raineys through a culturally tumultuous period: the elections of Barack Obama; the shooting of Michael Brown in Ferguson; and the presidential campaign of Donald Trump in 2016. Yet somehow, in the simultaneously banal and unbelievably eventful lives of the film’s subjects, these historic moments are mere blips – more importantly in Quest, we witness the construction of the Rainey family’s damaged road. 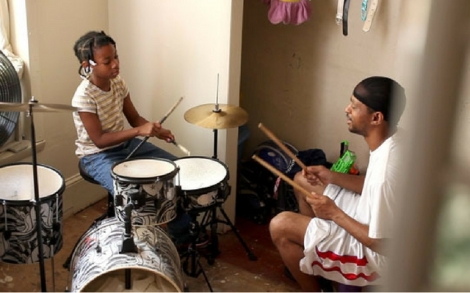 We first notice in their neighborhood a collision of growth and collapse, of modernity and American history, and of safety with danger. Quest’s home studio emerges as a figurative and literal haven for family and friends alike. Even those who are unnecessarily troubled, like the hyper-verbal rap artist Price, find freedom to be themselves during the “Freestyle Fridays” in the Rainey home. Lindsay Utz, the film’s exemplary editor, loops these beat-making sessions into a series of musical montages as impressive as any of the songs in La La Land (and far more sociologically complex.) But outside the studio doors, the world of North Philadelphia is plagued by gun violence, urban decay, and a palpable sense of historical erasure as the country moves ever closer to its new president. The hip-hop sequences are delectable palliatives, but they cure nothing. Neither the filmmakers nor the Raineys, thankfully, shy away from exposing their many ills.

The witnessing we are allowed is a gift of humane and moral sharing from the family to the filmmakers, and in kind from Olshefski, producer Sabrina Schmidt Gordon (of Documented), and Utz to us. ITVS produced the film, with support from the IFP Documentary Lab and Cinereach, and it’s just had its World Premiere in U.S. Documentary Competition at the Sundance Film Festival. Yet even with such prestige behind it, this is not the kind of gift you get framed and put on a wall, like its closest counterpart in cinema: Richard Linklater’s Boyhood. It is meant to be re-gifted to those you care about, both with love and with caution.

Quest: the Fury and the Sound is a painful venture into the lives of strangers, and I imagine it will be difficult to sell. For one thing, while it is meditative in tone and ultimately exceptionally touching, the first twenty minutes of the film are slow-moving and aesthetically unengaging. Olshefski has said that he began shooting the Raineys as part of a photography series, and his early interviews with them feel outside Utz’s full narrative. The cinematography starts as typical, more haphazard vérité: we follow Quest on his newspaper route, sit in at the studio, and talk to Christine’a while she’s walking home from work. Though there is a latent, trusting dialogue within the narration between the director and his subjects, Olshefski’s attempt at fly-on-the-wall veracity gets the movie off to a slow start. There are even a few instances in the early sequences of what seems to be under-finished color and sound mixing, a criticism that few audience members will notice but which the filmmakers will, I hope, consider valid (if not, please e-mail me, and we can have our own dialogue.)

But when a family crisis brings Olshefski back to the Rainey household in 2013, the fact that we are watching indescribably personal nonfiction explodes into an exciting and upsetting recognition. Utz moves briskly between Quest and Christine’a in their most distraught moments, and they begin to match the complicated qualities of their Pennsylvania hometown: powerful, heavy with history, beloved by neighbors, rich with diverse interests, and filled with many kinds of pain.

The filmmakers must have been rife with inner conflict, knowing that their project had expanded from a somewhat pedestrian day-in-the-life documentary short into a breathtaking feature-length exhibition of personal agony and resilience at the expense of the family’s joy. Appropriately, the film begins at this stage to move past its aesthetic limitations into a more artful, becalmed style. Olshefski transitions subtly from true cinema vérité into lingering, fluid hand-held close-ups, while Utz (who also edited Bully) fuses elaborate audiovisual overlays of hip-hop performance with Quest’s and Ma Quest’s narration. By the revitalizing third act, this darling film has become beautiful in its intimacy; Olshefski could have shot another decade of footage, and we would relish it.

I cannot begin to estimate the elemental compassion necessary to engage with the Raineys at the most basic level and to stick with what may have turned into a less narratively dramatic story. Olshefski, who began this project as an MFA student at Temple University, allegedly slept at the Rainey studio in order to join Quest on his 3 a.m. paper route; maintained a short filmmaking and photography practice in Philadelphia; and became an Assistant Professor at Rowan University, all while collecting hundreds of hours of footage. He also has two children, like Christopher and Christine’a. Between the filmmaker and the Raineys, we find vitality and joie de vivre powerful enough to fuel a jet engine. Luckily for us viewers, they’ve applied their triad of energies to musical cinema.

One response to “Sundance 2017: Jonathan Olshefski’s “Quest” Reaches the Apex of Meditative Humanism”