We have all heard the story before, and perhaps even lived it. A schlubby, twitchy researcher at an animal-testing facility outside Boston manages a one-night stand with the office’s resident sexpot (Jaime Ray Newman). He becomes obsessed with the memory of their touch; she becomes repulsed by it. And in the blink of an eye, things start to spin out of control because Paul – played by writer/director/producer/actor/editor Alex Karpovsky (Girls, Red Flag) – is desperate, lonely and unstable. He pets rabbits while hiding behind pillars. She flirts with a more fit, handsome coworker. Then something really bad happens to someone (guess whom?) So it goes in such movies.

Completed in 2012 and released on video-on-demand in time with its presentation at the 2013 TriBeCa Film Festival, Karpovsky’s fourth film, Rubberneck, is more important as a showcase than as a unique work of fiction. It breaks virtually no rules of the modern thriller except to cut from shot to shot at a lackadaisical, calm pace. It maintains consistently discomforting mood, using reds and greens in the photography to suggest the monstrous feelings growing inside Paul. All the necessary choker close-ups, Hitchcockian Dutch angles, and tense music by James Lavino are in place. Rubberneck exudes psychosexual danger in all the regular ways, without daring to venture into places where individualism might have gone further.

But what is most interesting about multihyphenate Karpovsky’s independent feature is its connection to another of the director’s 2012 films, the hip dark-comedy Red Flag (of which an earlier TriBeCa review can be found here.) Red Flag followed an indie-filmmaker named Alex Karpovsky who struggles with neurosis, hypochondria, and innate self-obsession while peddling his film to public screenings and festivals around the U.S. The film was mumblecore’s answer to Woody Allen’s Stardust Memories (1980), a meta-exploration into the mind of an oblivious imbecile with the heart of a poet and the eye of a movie-maker. That picture seemed only to register its star’s relationship to Allen’s film in passing. But Allen, who had released the grim masterpiece Interiors just a year before Stardust, was proving as the star, writer, and director of his latter film, his authorship of varied and well-hewn genre. 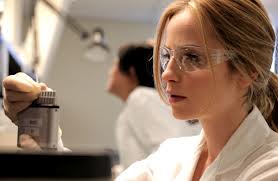 By pairing Flag and Rubberneck, Karpovsky demonstrates by association – a snide, abrasive, part-slapstick comedy with a solemn, concise romantic thriller – that he is the closest thing modern filmmaking has to the inimitable Allen. In Karpovsky’s films, loose plotting gives way to a higher-than-typical density of smart dialogue and unrelenting emotional effect. His comedies are funny, through and through; a thriller, thrilling, without breaking the film’s character to create false or unnecessary feelings in the viewer.

As an actor here, Karpovsky’s charisma is ever-present but difficult to put into words. He is tall, lanky, and foppish, with a shock of black hair and Slavic features (which he used to great comic effect in Flag). His character, Paul, is haunted both by unprecedented sex with Danielle and by the harm he and his sister (Amanda Good Hennessey, in strong support) came to earlier in life by their mother. While he seems to be diligent in his work at the research facility, he is also easily distracted and emotionally sensitive. If it weren’t for the dorky sweaters and department-story suit-shirts he wears to work like a costume every day, Paul might be a handsome man, and we understand how Danielle’s alcohol consumption might released both attraction and pity.

But Newman’s performance, while solid, is hardly multidimensional, and is never allowed to flush out the feelings between her and Paul. She is instead the cherry on top of a life of trauma for her coworker, and becomes the subject of his obsession. Sequences between them recall the theater in both their intimacy and their verbosity. Sadly, that sensibility has consequences: the actors seem far too regulated and practiced to provide many shocks. Though the film’s thrills are consistent, its impact is not – we are reminded from conversation to conversation that this is tried-and-true artifice, with made-up individuals chatting as if they were real.

To return to meta-filmmaking, Karpovsky more clearly demonstrates his working mastery of the medium than his attention to character development. Thanks to Garth Donovan (who also co-wrote and produced) and Karpovsky, working with crisp, soulful cinematography from Beecher Cotton, Rubberneck is all mood, tone, and sensation. When Newman, Karpovsky and Hennessey deliver their lines, they do not excel enough to be greater than cogs in a machine. Now that’s a shame, mostly because Karpovsky’s star is on the rise, and for good reason. Following his acclaimed performance in Lena Dunham’s HBO series Girls, he has worked with Daniel Schechter and the Coen Brothers. That machine is working at full capacity, but its operator deserves a pay raise and a promotion.