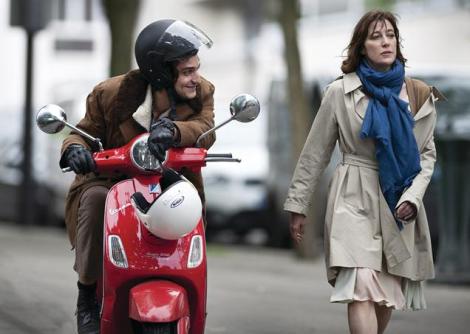 It doesn’t get more quaint or more personal than the third feature from writer-director-actor Valeria Bruni Tedeschi, she of the wide blue eyes and strong chin. Tedeschi’s self-exposure and willing exteriority are rendered so frankly, though, that only the coldest of souls could resist A Castle in Italy. Co-written by the gifted Noemie Lvovsky (Farewell My Queen) and Agnes de Sacy, Bruni Tedeschi’s film brings to the fore the kind of life-authorship that only the best creative memoirs can achieve. To top off the package, she has melded – more deftly and complexly than her previous output would have suggested possible – profound emotional response and Absurdist humor into a hybrid work. This is a special film.

Louise Rossi Levy is a spoiled brat now and always has been: at forty-four (or forty-three, as she sometimes mumbles), she remains the heir to a significant Italian estate. La Mere Rossi Levy (the remarkable Marisa Borini, the actress’s real life parent) lives alone near it, waiting for the occasional visits from her caring daughter and son, Ludovic (Filippo Timi.) As in Ms. Bruni Tedeschi’s life, her brother (the actual one now sadly deceased) has AIDS, as well as a miserable but thunderstruck younger lover (Celine Salette, perfect.) Though the patriarch of the family is long gone, he was a man of contradictions, the kind to speak brutally to his wife just as he was acquiring an original Brueghel. Theirs was a life of charm, entitlement, and the cynicism of the elite.

Earlier in her life, Louise was an actress, but not the kind that kept going when good roles becoming scarcer and scarcer. So what a coincidence that she should meet and fall in love with Nathan, a beautiful actor working for his director father played by Louis Garrel, French actor and son of director Philippe Garrel, while on the set of a new film! As the two begin to live with one another, their lives blur, with Nathan and Ludovic forming a tenuous relationship, Louise “meeting” Nathan’s father (with whom she has an unmentionable past), and both characters’ film careers dying as we watch. As I said: a life of entitlement.

High-concept romances aside, let us attend to how scenic and warm this film truly is. Bruni Tedeschi, DP Jeanne Lepoirie, and set designer Emmanuelle Duplay make impressive use of Paris, perhaps the most oft-seen city in Western film besides Brooklyn; rather than make things fresh, as when Louise goes to feed the homeless in the Louvre gardens, we see a sunlit version of good ol’ Paris. The filmmakers are consistent: much of the film was shot in Turin and Naples, and again we find ourselves bathed in saturation and light. The most impressive of the lot is the Rossi Levy castle, Castagneto, of which we see very little that isn’t medieval and beautiful. Duplay makes especially good use of the Castagneto grounds, on which pivots one of the major emotional scenes in a film wrought with them.

If there’s a noticeable issue with A Castle in Italy, it’s an excess of emotion without the ballast of melodrama. No, what Bruni Tedeschi serves up isn’t for the faint of heart – leeching friends (embodied by the superb French star Xavier Beauvois), dying relatives, and an unsupportive Italian church make as much for the comedy at which the multihyphenate excels as for painful, intense sadness. This is the stuff of deep wisdom, much of which recalls the nuggets of goodness and knowledge that transferred co-writer Lvovksy’s Cesar-winning Camille Rewinds from rom-com realm into the land of the brilliant. Mundanity plays as much as part in Castle as in that feature: how parents and children bicker; how the denizens of Paris react to a strangely dressed woman; the value of a scarf. But like its predecessor, Bruni Tedeschi’s film exceeds itself in its effectiveness.

Coming out strongest in a championship battle is Filippo Timi, an Italian actor best known for his award-winning role in 2008’s Vincere, and the revelatory mother. Together, they bring so much to life, as with a scene of them dancing in a hospital to Fred Buscaglione’s “Che Bambola!” When these two actors come together under Bruni Tedeschi’s direction, what wells inside your chest isn’t just admiration for the performances. It’s love for characters so well-crafted and intended that you cannot help yourself.