Kyle Henry is a writer, educator, editor, and filmmaker. In 2006, he was nominated for the John Cassavetes Award at the Independent Spirit Awards for his debut feature, Room. A segment from his anthology film, Fourplay, had its World Premiere at the 2011 Cannes Film Festival’s Directors’ Fortnight, and was an Official Selection of the 2012 Sundance Film Festival. The film is now available on DVD and streaming at VimeoPro. He is currently an Assistant Professor of Radio-Television-Film at Northwestern University’s School of Communication, where he is also the Associate Director of a new Master of Fine Arts program in Documentary Media. Kyle Henry spoke earlier this year with Sean Malin of CineMalin: Film Commentary and Criticism about his early film career in Austin, Texas, his work in higher education, and what it’s like to have benefactors like R.E.M. frontman Michael Stipe. This interview has been transcribed, edited, and compressed from audio for publication.

Sean Malin: You have co-written and directed two feature films, Room (2005) and Fourplay (2012), but the gap between their releases was a hefty seven years. What kept those projects so far apart in time?

Kyle Henry: I had some big ideas that I was shopping around (after Room) but, as sometimes happens, financing fell through on them. After that, I felt like I had to return to Step One and figure out what [project] would be worth putting everything on the line for. I have this need to communicate things, so I went back to my indie, D.I.Y. roots, the result of which was Fourplay. As I always tell my students at Northwestern, that film is an example not only of what I want to communicate to the world, but also of how to maximize one’s available resources. It required a reality check on my part – I had to figure out exactly what resources I had and commit to making something without being forced to wait on twenty other “Yeses.”

SM: I studied experimental film as an undergraduate student and I know you’ve done some experimental work as well, right?

SM: So you’ll understand when I say that, given what I know about making fringe or experimental films, the process you’re talking about would scare me witless. It frightens me because it seems like such a gamble on your livelihood to take every resource at your disposal and put it into a film.

KH: Sure, I do understand, but I’m very fortunate in that I have been able to support myself as a feature film editor. In 2002, I edited [Eric Eason’s] film Manito, which won awards at Sundance and the Best Feature award at SXSW. Since then, editing has provided another way for me to stay creatively involved with the world of filmmaking. I love telling stories and helping other filmmakers to tell stories, but I also know many people who don’t have the flexibility or the skill to collaborate in that way.

SM: When it first premiered, Fourplay was just a short film. How did that evolve into the completed feature?

KH: This goes back to that question of personal resources: what do I have at my disposal, and how can I make another film? In my case, I had these pockets of time. It was always the plan to make Fourplay into an anthology of shorts. I commissioned two writers, Carlos Treviño and Jessica Hedrick, to pitch me ideas for what they would consider the most outré sex acts they could imagine, stories that others would consider degenerate but which they could make emotionally moving and engaging out of those types of encounters. In the process, [the audience] would gain a better understanding of the characters and their worlds through these acts. They pitched me eight or nine good story ideas, and from those I selected the “four” in “fourplay.” So we embarked on shooting the first one, though I had the other three scripts ready to go for when we found those pockets of time and money to make them.

SM: In between those pockets of availability, were there disparities in the amount of time and money your team had from short segment to segment?

KH: Those things certainly snowballed after the first one we made, Fourplay: San Francisco. That film stars Austin actor and performance artist Paul Soileau, also known as “Christeene.” It was really well received, which helped get the ball rolling, and each film had progressively more resources. I was joking around with my cinematographer, P.J. Raval, that Fourplay ended up being a record of the development of low-budget digital camcorder technology. We shot San Francisco on HDV; the next short on a Sony ex-3; and for the last two, we used the Canon DSLR, which was just exploding into popularity. I like to shoot in a way that maximizes my time with the actors, so none of the sets – including Tampa, which had a hot mess of a production design – had any more than twelve people on the crew. I really like working in an intimate way on set. 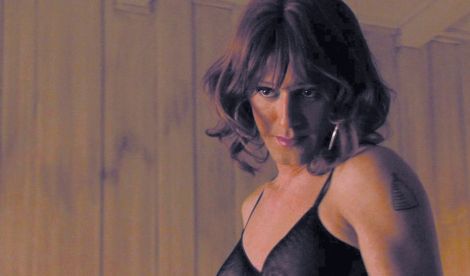 SM: What about working with a crew of friends – does that ever help you get a project made?

KH: Yes, I do work with my friends. There’s a short-hand that comes from working with the same people over and over again, which, again, helps you maximize time. And you go through drama with people over the course of making many features together. So if you’ve gotten out your petty squabbles and your hurt feelings on your first feature, why not continue building on the relationship you developed together?

KH: *Laughs* Michael, much like Jim, is the sort of person that understands the artistic process. I think they each also had a few important mentors in their lives, so they see it as their responsibilities to pay it forward with others, you know? I see their company, C-Hundred Film Corp, as a sort of, “filmmaker incubator” that they use to help one or two projects a year get made that might run into trouble in the contemporary landscape *laughs*. Sometimes they help really risky projects, like Rodney Evans’s Brother to Brother (2004) or Cheryl Dunye’s Stranger Inside (2001). It’s people like Jim and Michael that help create community, and allow for interesting work to continue to happen. They are a lot like Rick [Linklater] with Austin and the Austin Film Society – nobody has to do what he’s doing, and if you look at how few of the big filmmakers of the world actually do spend their capital and time reinvesting in community, you’ll see that they are very special unicorns.

SM: You’ve worked in various capacities all around the country. Have you found each place as supportive to their respective filmmaking communities as Austin?

KH: I’ve lived and worked in San Francisco, New York, Chicago, and Austin at this point, and you can find your community in any of those places. But there’s something special about Austin. The way Rick put it to me one time is that, “Austin’s always been the kind of place that attracted people who are searching.” I think every city I’ve lived in has its own metaphor. New York is the kind of place that attracts people who want to be at the top of the heap. Los Angeles is where people who want to reinvent themselves as artists go. So depending on what you’re attracted to as a person, you can find your people.

SM: Having lived in New York, Los Angeles, San Francisco, and Austin myself – though never Chicago, regrettably – those metaphors seem really apt. But these are all major cities with fairly defined atmospheres and communities. The people in Austin, queer or otherwise, are certainly more interested in something like Fourplay, so it makes sense that your film would find acclaim and viewers there. But what happens when you show your work to audiences that are less metropolitan, less fully exposed to such films, or a little less defined by their communal metaphors? What happened when you showed your work to the communities in smaller cities?

KH: To tell you the truth, at certain screenings, I found those communities to have the more welcoming and enthusiastic audiences. There was a resonance to the issues we were talking about, like shame or repression, that stuck with them in a visceral way. I tried to make work that wasn’t just queer, but instead, ran the gamut of sexual expression. We are still in a culture that likes to put everything in neat little boxes – from programming to distribution. So for example, queer festivals would not really mention anything about Fourplay: Austin [in which a man and woman struggle with a rut in their relationship] and those audiences would think, “What is this – a straight couple fucking?!” Whereas when we showed Tampa, which to me seems the most outrageous of [the segments], it went over like gangbusters with those crowds.

SM: You have been teaching filmmaking at Northwestern University since 2012, so I imagine you’re starting to become a mentor for others as well. Are you at the point yet where you have helped to incubate the students’ work?

KH: I hope so, because I take great pleasure in providing a space for young talent to take creative risks and, “be all they can be,” as it were. I think that’s my responsibility; I’ve been fortunate enough to have received help over the years, so we need to play a large role in helping the next generation of media makers.

SM: When we were talking before the interview, you mentioned a new program you are helping run at Northwestern. Can you tell me what’s involved in that?

KH: I’m working as the Associate Director – with the documentary filmmaker, Debra Tolchinsky, as the Director – for what I think is a very innovative approach to documentary media-making. The new program is a Master of Fine Arts program that teaches documentary film-making as a hybrid art form. Filmmakers who come into the program are required to take three core classes in their first year: a straightforward documentary class; a class on the intersection between narrative fiction and documentary work; and finally, a new Media Construction class that will help the filmmakers land on whatever modality they wish to make their work through. Research might lead some of them to land on a biopic, for instance, and they can learn to cast actors and work in a more traditional narrative manner. Or they can choose to intersect fiction and documentary. When I see work like The Act of Killing (2013) or Stories We Tell (2013), I think of the work that Tabitha Jackson at the Sundance Institute’s Documentary Film Program is trying to do. She has said that she wanted to focus more on story and the power of storytelling, and that’s the sort of thing our program will also seek to emphasize.

One response to “In Conversation With: Kyle Henry”