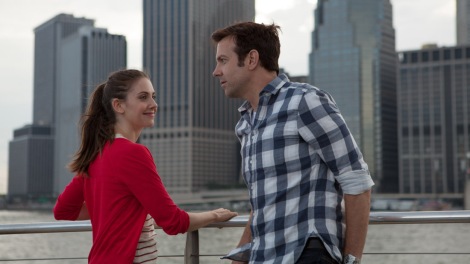 Tried-and-tropey plotting, unimaginative tech credits, and a personality-less New York City setting won’t be enough to keep Leslye Headland’s second feature as writer/director from charming the pants off those who like to see beautiful people roar through one-liners. A marked improvement from the more inventive/less pleasant Bachelorette, her 2011 debut as a cinematic force to be reckoned with, Headland’s Sleeping with Other People – which, like its forebear, had its World Premiere at the Sundance Film Festival – is bound for a glory somewhere between niche and Nancy Meyers.

Driving the film to success will undoubtedly be its greatest two assets, the lead lovebirds played by natural-born movie stars Jason Sudeikis and Alison Brie. He is a tall, careless womanizer with a heart of gold; she is a love-addicted serial cheater with a goofy sense of humor and a secret desire to break up the marriage of her manipulative lover (Adam Scott, in pure, mustachioed asshole mode.) Together, as they meet, re-meet, and become platonic best friends, He and She fall completely unpredictably in love, despite his blossoming relationship with His tech firm boss (Amanda Peet) and Her newfound single-dad partner (Marc Blucas [it’s been a while!])

Headland herself has described the new film as “When Harry Met Sally for assholes,” and while that comment hits the nail on the head, it also ignores the well of deeper subjects girding the film for what I expect will be unexpectedly large popularity. Sudeikis carries resignation and cynicism to what is essentially his role from Horrible Bosses without the pressure of competing with Jason Bateman and Charlie Day. The result is his most impressive and significant performance to date as Jake, charming and sad in the same measure that so many of his emotional man-child roles could use. Headland writes particularly well for Brie’s character, Lainey, a career woman so desperate for sexual connection that she’s willing to be alternately a homewrecker or a friendship-ruiner. Neither Brie nor Headland shy away from the psychological problematics of Lainey’s behavior; no apologetic Meg Ryan performances here.

In fact, while Headland has certainly lifted from Ephron’s script (and countless other quandrangular love stories) a narrative structure and story so formulaic as to be almost tedious, she continues to grow as a master of the crude, long-form joke. Packed into the second act, in which Jake and Lainey get close to one another’s other relationships, are several elaborate sequences like a masturbation tutorial on a glass jar and a particularly buoyant children’s dance party set to Bowie’s “Modern Love”. It’s been well-noted that Headland, an accomplished playwright and general bon vivant, has a way with nasty words, but her set-ups and punchlines achieve peak success thanks to careful work with the editor Paul Frank. She ends occupying the space between Ephron and, say, the Adam McKay-Will Ferrell camp (which produced under the Gary Sanchez banner.)

It’s worth nothing as well that while the film is firmly anchored by Sudeikis and Brie, both of whom were in desperate need of star vehicles for their particular talents and reputed good looks, Headland’s work with a riotous supporting cast creates a protective net of comedy for those inevitable moments when Classic Hollywood takes over for Good Filmmaking. Scott, who also starred in Patrick Brice’s Sundance premiere The Overnight [2015], has some fun with the disgusting sleaze that his OB-GYN adulterer uses to connive Lainey; it’s a welcome return to dirty for a man steadily becoming known as Parks & Recreation’s milquetoast Ben Wyatt. Peet is in peak form here, too, though her scenes with Sudeikis are overshadowed by those Jake shares with his business partner Xander. As played by the unstoppable Jason Mantzoukas, Xander and his wife Naomi (Andrea Savage) absorb Headland’s choicest lines, and the film even concludes with an on-the-spot bickering scene improvised by the two comics.

Including that scene takes flexibility and an ear for funny, both of which are strong enough in Headland to prevent all but the cinephile crowd (and perhaps the deeply sexually conservative) from frowning too deeply at Sleeping with Other People when IFC Films distributes the film later in 2015. What’s missing – arresting imagery, multi-dimensional secondary characters (Peet excepted here), or imaginative storytelling – simply leaves some improvements to hope for from this extremely gifted humorist as she ventures into bigger and better things.