Let’s see here: we have Dumbo, Horton Hears a Who!, and depending on your interpretation, Elephant and The Elephant Man. Do Ice Age and its overabundant sequels count because they star a couple of wooly mammoths? If so, we have enough films already to construct a subcategory for Netflix to plug into its search algorithm.

On the whole, Elephant Cinema has been dominated either by animation, where presenting these animals at their cutest is par for the course; or by self-serious documentaries like Planet Earth or recent awards contender The Ivory Game. The creatures are often the subject of humankind’s mystical affections, their curious intelligence amusing and sometimes shocking. We underestimate them, which forces a film like Water for Elephants – where the title animals are nothing but circus slaves – to focus on people. But a new project which has just premiered at Sundance, Pop Aye, intervenes in our conception of the elephant’s onscreen capacity for gravitas, humor, and emotion.

Written and directed by a first-time feature filmmaker, Kirsten Tan, this artful Southeast Asia-set road-trip comedy plays like Air Bud as directed by Valerie Faris and Jonathan Dayton. This has its benefits, of course, like the amusement of seeing a laconic behemoth drag a shopping cart along a Thai highway. The elephant belongs to Thana (Penpak Sirikul, hilarious in the role Paul Giamatti must be given in the [potential] remake), a talented architect whose disinterested wife forces him and his pet out of her house after being fondled in her sleep by a trunk. An empty-minded protagonist, Sirikul is a mess of pratfalls and expensive glasses frames, a broken-down loser of elephantine obsessions and collapsed aspirations.

Theirs is a Laurel and Hardy routine: when Thana gets hurt, his companion sprays water on him; if his feet get sore, he hitches a ride. Tan pivots on the synchronous relationship between these two goofballs as they hoof it from Bangkok to the rural town of Loei, rarely filming one character without the other in frame. This is a pet adventure, no doubt about it, but with closer resemblances to Easy Rider than to Lassie. Thana and Popeye (yes, after the spinach-eating sailor) are companions, rather than master and servant.

This power dynamic, while intended to revise the pet film format, creates an unfortunate dramatic vacuum in Tan’s Jury Award-winning screenplay. As cute as they seem to be in the eyes of the public, elephants do not express themselves with the elaborate facial movements of more cinematic animals. Dogs, monkeys, cats, and horses have been historically easiest for filmmakers to anthropomorphize; used successfully, they can become the hosts for our most powerful affections or parental concern.

But Bong, in the Popeye role, has few jokes to his/her name that work in terms of timing. Thana tries to talk to and engage his elephant, often cracking wise at a strange sight on the road (Tan litters the script with Sundance-friendly characters, including a philanthropic hobo and some mouthy karaoke singers). Unlike his expressive human counterpart, Bong looks vapidly into the camera and twitches its ears – Stella Adler would be furious with the performance. Even Lee Chatametikool, whose stellar editing undoubtedly protected Tan’s comedic imprint from elephant sabotage (elephantage?), cannot give Bong the charm of that monkey from Night at the Museum.

Tan’s overreliance on the dull animal interferes with her otherwise quite lovely direction. She and Chananun Chotrungrof capture a colorful and contemporary section of the Thai countryside where modern technology intersects with unremitting rural realities. Televisions are present in every bar and crumbling home, but farmers are still forced into grueling manual labor in the village fields. When Thana stops for necessary human groceries, he sees supermarkets selling mass-produced sandals, and the rural poor with cell phones. No border patrol stops the mismatched pair as they move from Singapore to Thailand, and the few police who do notice Popeye try in vain to transport him to their station. Tan creates an absurdist modern world without stakes, effective authority figures, or real danger: we don’t worry about Bong trampling Sirikul or taking a shit in public, because he makes us laugh. 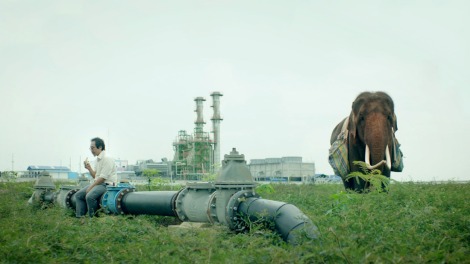 Chotrungrof, perhaps by necessity, shoots in an escalating series of medium to long-shots that do the unthinkable by dwarfing the elephant in spectacular natural landscapes. He shoots Bong lovingly, and Sirikul laughably – the hero and the slob – as if to suggest the grotesqueness of a human coming into contact with pure beauty. Thailand, too, has rarely looked so good in locally-made comedies. Tan’s is far from a big-budget sensibility, defying the high-key lighting trend adopted by domestic blockbuster directors like Note Cherm-Yim and Banjong Pisanthanakun. Hers is a more tender approach, with the handsomeness of Loie and Bangkok’s buildings secondary to the onscreen action. Though we’re not quite in the art-house with Pop Aye, the film is lit to resemble it.

Hitting that middle ground dramatically is likely what intrigued Tan to Sundance, an appropriate venue for any film best described as “quirk-filled.” As I implied earlier, it would come as no surprise to see an American distributor with a string of successful low-budget comedies – say, The Orchard or Magnolia Pictures – to want to bankroll a limited release with the expectation of funding a potential remake. While Tan’s debut does not distinguish itself from the pack in terms of technical prowess, it has enough of the ingredients of several unexpected hits, from The Black Stallion to Little Miss Sunshine, to please animal-lovers and indie film fans equally. And poor Paul Giamatti hasn’t had a lead role to match his genius since Barney’s Version. Producers, just don’t forget to cut me a percentage when the dough rolls in.