“If for the baby boomers self-actualization was a conscious project, and if for Gen X – born in the sixties and seventies – it was a mandate to be undermined, then for millennials it’s more like an atmospheric condition: inescapable, ordinary, and perhaps increasingly toxic. A generation has inherited a world without being able to live in it.”
– Jia Tolentino, “Where Millennials Come From”

In Sam Boyd’s sometimes-wise, sometimes-wandering new drama, In a Relationship, a character’s personal bildung concludes when he purchases a decorative couch. Who knew that adulthood could be bought at Anthropologie?

Boyd, the screenwriter and director of Happy Fucking Birthday, makes a capable feature debut here by adapting his 2015 short, also called In a Relationship. Both revolve around two Gen Y couples, one in the throes of a toxic relationship and another that is just beginning; but while the plots are the same, the cast is entirely new.

The feature version is primarily a star vehicle for Michael Angarano and Emma Roberts (who also executive produced), whose Owen and Hallie are struggling to remain connected after years together.

Owen, like so many young people – and most people in general, come to think of it – is sex-obsessed, bored with routine and desperate for fresh air. Hallie shares his desires, but not his selfishness. Her instincts force her to duct-tape the damage by suggesting they live together. Owen, perhaps realizing that cohabitation would be hellish for them both, balks.

The first to learn of Hallie’s heartbreak is her cousin, Willa (Dree Hemingway, in a quietly tortured performance), who has just begun dating Owen’s best friend, Matt (Patrick Gibson of The O.A.). Owen is a self-proclaimed nerd, sexually naïve and head-over-heels for the more detached Willa. Unbeknownst to him, he is also competing for her affections with a greasy alpha-hipster named Jakob (pronounced “Ya-cub.” Isn’t that funny?)

As one relationship falls apart, another comes together…until it, too, suffers from the misalignment of two people’s priorities and failures in communication. In Boyd’s telling, the allure of what cannot be had is so great that not a single character – including those played in small turns by indie film stalwarts Greta Lee, Andre Hyland, and Armen Weitzman – feels satisfied with the ones they’re with.

Everyone strays, or wishes to, and no one can love for very long.

Working from his own script here, Boyd displays an enviable ear for dialogue, a penchant for obscenity, and a sure hand at casting. Angarano, playing strongly against type as the narcissistic, short-tempered, and commitment-phobic Owen, is the clearest embodiment of these qualities.

His ability to sabotage not only his own relationships but also those of his friends and former lovers is something of a talent.

Twice, he harasses and mocks his ex-girlfriend for trying to date in the months after their break-up. After a possible reconciliation with her, he complains that she seduced him. Owen is an impulsive, sexist character, and Angarano brings him daringly to life. 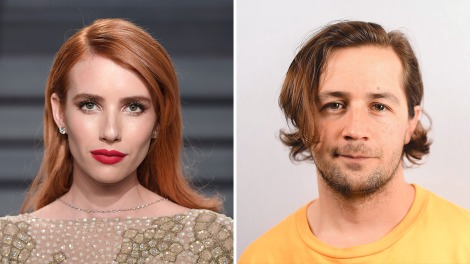 Despite his power, however, the intimate melancholia that Boyd is striving for never quite coheres. Roberts, Hemingway, and Gibson work hard – Hemingway, as a woman who manipulates and is manipulated in return, has never been more effective – but in Boyd’s stagey direction, their individual tastes and behavior often come off as forced.

Clumsy references to classic film and OJ: Made in America – “so good!” – serve only to date the movie’s production. Theoretically, if a character’s likeability is directly related to her pop-culture references, then those featured in In a Relationship are at a disadvantage from the get-go. Didn’t Ready Player One already prove this principle?

Meanwhile, the movie centers itself on a series of arguments, yet none of the characters has enough passion to talk over the other. These are among the most polite arguments ever recorded in American cinema history. Gone are the days of Altman’s overlapping Short Cuts dialogue; Boyd’s is a more dispassionate style, one that may be suited more to live theater than to film.

But perhaps most distracting is the fact that Owen and Matt work at the Silent Movie Theatre in Los Angeles, which at the time of the shoot was still the home of The Cinefamily.

The Theatre has since shut down after several high-profile cases of sexual harassment in its ranks last year. To show it as a date-night locale (early in their relationship, Matt takes Willa to see Edgar G. Ulmer’s noir masterpiece Detour there) would be like setting a Thanksgiving dinner scene in Cliff Huxtable’s house. Trigger warning, anyone?

One suspects that Boyd and his editor, Max Goldblatt, will be forced to revise the film somehow (which had its World Premiere April 20th in the Spotlight Narrative section of the Tribeca Film Festival) should it be picked up for national distribution. But much will depend on the next week of screenings and the public’s reception to it during the festival.

I am confident that there is room for a wide audience here, and a smart one at that. Boyd’s script certainly feels in touch with the intimate wounds we millennials inflict on one another, the micro-aggressions especially (the discomfort in his sex scenes is particularly acute and well-observed).

Those seeking to see themselves onscreen, rather than get lost in Hollywood spectacle, may just have their opportunity.