Like the death-metal-loving cousin to Friday Night Lights, Nancy Schwartzman’s Roll Red Roll is a necessary shock to the system that sustains a furious tone over its swift 80-minute runtime. It is also, not excepting HBO’s newly-released Penn State drama Paterno, among the most singularly excoriating critiques of American sport culture as a breeding ground for rapists, their handlers, and their apologists ever made.

This is Schwartman’s feature debut, and an evident labor of love; but one wonders, given the subject matter, if it was also a torturous affair. Her subject of choice is well known to some: in 2012, a high-school-aged girl was raped at a party in Steubenville, Ohio, where the town is united in their adulation for Big Red, the high school football team.

Appropriately (in a Shakespearean kind of way), the rapists were star players who had premeditated the attack. During and after the rape, the players’ friends tweeted, Facebooked, and texted about the night’s events to one another, ultimately leading to a 400,000-message batch of evidence which fueled the ensuing investigation.

I say that some will know this story, but just as many may not – and until the film’s recent world premiere at Tribeca Film Festival, neither had I.

Schwartzman and her editor, Christopher White (whose skill with narrative construction is nearly sublime), lean heavily on national news coverage of the Steubenville case, yet somehow, this particular scandal seems to have come and gone in the American zeitgeist. Jane Doe’s case was just another horrific small-town crime in a society rife with them.

It is precisely that innocuousness – and the rape culture from which it emerged – that Schwartzman interrogates with a dogged vigor. It would be unfair to classify her process as true-crime-oriented, especially considering the case was “resolved” in 2013 with the sentencing of the football players (left out of the prosecution were charges against several other students who watched, participated in, and mocked the rape on social media.)

Nonetheless, investigations, both public and private, are sewn into the doc’s fabric.

Schwartzman speaks to the softly commanding – perhaps even too soft, it’s implied – lead investigator in the case, J.P. Rigaud, who appears both in personal interviews and in discussions with the young criminals. Rigaud was forced to comb through hundreds of thousands of messages in determining what happened that August night, and Schwartzman allows him to explain his process with poise and confidence.

Even so, she suggests that Rigaud’s techniques were ineffectual when compared with a local criminal blogger, Alexandria Goddard, who fought to push Jane Doe’s case into the national news cycle. Goddard is the most forceful presence in the picture, veering between righteous anger, forsakenness, and a sort of general malaise, depending on the scene.

She certainly has earned the right to be blue: Goddard tells us that she was continually harassed and threatened (her blog, Prinnified, was sued in 2012 by the parents of a local teenager) after posting about the rape.

That Goddard is as much a victim of the same predatory milieu that produced Jane Doe’s assault and shielded the perpetrators is evident. But in making that alignment, Schwartzman casts her net of critique so widely that it threatens to suffocate the local tragedy.

Subjects of the film’s wrath include desensitization at the hands of social media; legalistic bureaucracy; the high school football money machine; and the American news cycle.

Even Anonymous makes an angry appearance, protesting the cover-up that several Steubevilles orchestrated. But whose side they are on, and the filmmakers’ feelings about the ethics of their hacktivism, comes across as ambiguous. All we know for sure is that they want transparency – but if that were truly the case, wouldn’t they give up the Guy Fawkes masks?

Rather than get sucked into the ethical minutiae of digital geopolitics, Schwartzman never takes her eye off the ball. Roll Red Roll is about as minutely and finely tailored as a feature-length debut can be, its tone an impeccable, unflagging dread. Even the color red – favored in subtle ways by the cinematographer, Matt Bockelman – becomes like a twisted Pavlovian bell: when you see it, you feel sick.

Unceasing intensity of this kind can be punishing, and as a result, the film is perhaps not the entertainment one might expect from its ripped-from-the-tabloids origins.

Schwartzman likely does not care. This is a nonfiction centered around a girl’s rape, after all – it is not supposed to be a “fun watch”, and it is not. That makes Tribeca’s admission of the film into its Spotlight Documentary section all the more admirable. Every ticket sold to a screening of Roll Red Roll makes the possibility of a sequel less and less necessary. At least, that’s the hope. 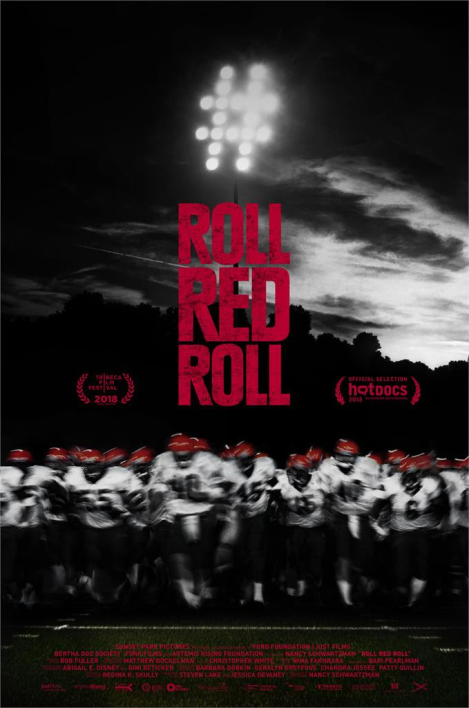