Christina Choe is a writer and director based in Brooklyn. Her short films, including I Am John Wayne [2011] and Flow [2010], have premiered to significant acclaim at festivals including the SXSW Film Festival and the Slamdance Film Festival. In 2015, she began an ongoing Kickstarter campaign for her film, Nancy, a selection of the 2013/2014 Venice Biennale College Cinema program. Nancy, a psychological drama about a female imposter whose life and lies begin to unravel, will be the filmmaker’s feature debut as director and writer. Christina Choe spoke with Sean Malin of CineMalin: Film Commentary and Criticism about the origins of her forthcoming project, working in American independent cinema, and the status of her crowdfunding campaign. This interview has been transcribed, edited, and compressed from audio for publication.

To support the Kickstarter for Nancy or to find more information, click here.

Sean Malin: The film you are raising money for now, Nancy, is being produced by Jonathan Duffy and Kelly Williams, both of whom I’ve interviewed for this site. How did they come on to the project?

Christina Choe: Jonathan and I met through another filmmaker, Yen Tan, who is also an amazing poster designer for Sundance and SXSW films. Yen and I met after he had seen my film The Queen; he also did the poster for another short, I Am John Wayne. We bonded right away and at some point, he read the script for Nancy. He loved it, so I told him I was looking for the right producers. Yen said, “Why don’t I just introduce you to mine?” [Mr.] Duffy had produced Yen’s Pit Stop [2013] with Kelly [Williams], and he really liked Nancy, which led to that whole producer-director dating game. I liked him right away because he got what I was trying to do with the script – you don’t always get that lucky.

SM: It seems for filmmakers in your position, like those about to embark on their first feature project or get a personal script off the ground, that the opposite is more often true. Before Nancy started to take off, had you come up against any creative obstacles with other projects?

CC: I did have a personal project a few years ago that didn’t quite make it, but not because of any creative differences between me and anyone else, necessarily. I was really green at that time and didn’t know many people in the industry. That made it pretty hard to make an independent film, especially when the people working on it would have had to do so for free before the movie was made. Everyone needs to want to be in that relationship with you, to really believe in a movie to get it made in order to have that effort be worthwhile. I feel so lucky to say I have that with Nancy.

SM: This project has two sets of producers, independent stalwarts all: in addition to Duffy and Williams, you have Gerry Kim and Mayuran Tiruchelvam of Dodgeville Films behind you. They have quite an amazing collective track record – the film must have quite the pitch. What’s the origin for the script?

CC: At some point, I became pretty obsessed with imposter stories, especially that of JT LeRoy. That particular story was a literary hoax, and there was also the documentary The Imposter [2012], which was based on a New Yorker article. I remember reading that article around 2008 and thinking, “I have to option this story – it’s so amazing!” Of course, by that point it had already been optioned five times or something. *Laughs* I still continued to be interested in these impostors because it is like, yes, sure, they’re chronic liars, but they ride this line between performance and truth. And in the case of LeRoy, sometimes impostors use identity as a metaphor for trauma.

SM: Over the last week, I watched many of your short films, and metaphors play a large part in your work. In I Am John Wayne, for example, the image of a Brooklyn youth riding a horse through urban streets on the way to Coney Island suggests profound grief. For me, it recalls the use of the “catfish” metaphor to describe the digital hoaxing that is becoming so widespread these days. It allows people to think of online impostors, the people involved in the Manti Te’o scandal for example, with this kind of stigma: like bottom-feeders or shit-eaters, like literal catfish.

CC: Yes, and I think that’s really weird. On some level, we are all involved in some level of personal performance. Everyone wears some kind of mask on social media. I’ve known people personally whose entire lives blur the line between reality and fiction.

SM: We all maintain façades but only some of us get relegated to the dregs of society. There’s still a stigma against impostors; fewer are seen like heroic rogues in the vein of Catch Me If You Can [2002] than like the eponymous character in Barbara Loden’s Wanda [1971], right?

CC: Yeah, that’s what fascinates me. That’s what’s kept me obsessed with impostor stories all the way through this Kickstarter [campaign].

SM: Without revealing how the script concludes, is Nancy going to be a glamorous portrait of a con artist? How does society judge the anti-heroine at the film’s center?

CC: What is interesting to me is asking what is human about impostors – what makes them do the things that they do? Like for a former professor of mine, being an impostor was a charming trick. [Students] formed connections with this person. It was like Dead Poet’s Society, but not cheesy – he just said profound, inspiring things in a charming accent. There was emotion involved and a real connection; it cannot be one hundred percent fake, you know?

Likewise, [the eponymous] Nancy does start off by lying on a blog about being pregnant with a defective child, but the nugget of that lie masks an actual emotional truth for her. She comes from a shitty, no-opportunity town, but since she’s a creative person…it just makes me wonder how I would have grown up had I been raised without an outlet for my creativity or my imagination. Also, I think the way society is at the moment – how things we see or hear about have to be brightened up or made light of – is related to how someone becomes an impostor. With Nancy, I really want to humanize an impostor in terms of the world we live in now. It’s not a portrait of a sociopath.

SM: On the campaign page, you mention the recent Amina Arraf scandal, and at Sundance I saw the documentary about her, The Amina Profile [2015]. In Amina’s case, sexuality and ethnicity play large parts in the formation of a false identity. How will those elements factor into the characterization of Nancy?

CC: Well, the fact that she’s female is important to me. I was just mentioning to someone that I still remember the first time I saw Barbara Loden’s Wanda. I thought, “This character is so stupid, so aimless. She’s not strong.” I had such a basic understanding of female representation onscreen – maybe as a result of brainwashing, to some extent – that I had no other real models for a character who is complex, or lost, or unlikeable, or morally ambiguous, like Wanda. It makes me wonder: would Nancy be easier to finance if it was called John or something? 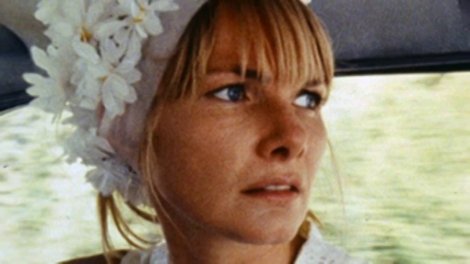 SM: The first thing you say in your Kickstarter video is that, as a Korean-American female filmmaker, you have always felt like a bit of an outsider in the world. Will Nancy reflect the same kind of feeling, or is she closer to someone like the recently departed Don Draper or Amina Arraf, whose assumptions of other identities led to their looming large in the public eye?

CC: Until the moment they are exposed, I think impostors are getting high off being on “the inside,” socially. They are driven by their needs for validation and love in some way. Nancy is always feeling on the outside – whether it be because of her shitty childhood, her socio-economic status, her feeling that she should be better than what she really is – leads her to this kind of social storytelling. If I really want to analyze it, I’d ask what the reasons are that I make movies. To connect just like my professor did, right? To reach an audience – to connect with the world? That’s what Nancy is trying to do, in her own social way, by impostoring. And that’s what I find endlessly fascinating about her.