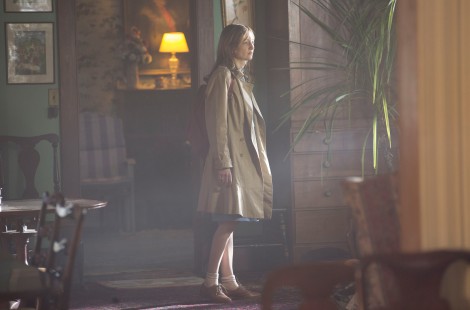 It is a personal gift, as a critic and general media consumer, to witness artists executing their crafts in front of your very eyes. Rendering visible the creation process is what makes Impressionist paintings so desirable to collectors; behind-the-scenes documentaries so valuable for DVD packagers; and that sculpting scene in Ghost truly sexy (Swayze is merely the cherry on top.) Even better, when those artists are actors, we can sometimes trace the evolution of their abilities not necessarily in growth, but in literal visibility – in how often their talents or traits are presented on screen; in how aesthetically pleasurable the environments for their performances; and in the complexities of their roles.

For me, one of the great pleasures in current media has been to watch Adam Driver – who broke out on Lena Dunham’s zeitgeisty Girls to much acclaim and two Emmy nominations, and who will soon pass over into massive fame when Star Wars: The Force Awakens premieres later in 2015 – find his footing in independent film. In 2013, he was excellent in three widely-admired features: Inside Llewyn Davis [dirs. Joel and Ethan Coen]; Frances Ha [dir. Noah Baumbach], and Tracks [dir. John Curran]. In the two years since, his star has risen as fast as that volcano-island in the Atlantic, with half a dozen additional projects (and three more incoming, according to his IMDB profile.) Part of his appeal is what should be his lack of it: his Kermit the Frog voice, massive height, barrel chest, and bowl-cut hairstyle are not widely found in American movie stars, but Driver has what we might call “That Thing.” (For more on this particular power, I recommend Hilton Als’s remarkable piece on the actor’s Girls co-star, Jemima Kirke.)

Appropriately, his recent role in Italian filmmaker Saverio Costanzo’s New York-based thriller Hungry Hearts is an astounding performance that has already earned the actor and his costar Best Actor and Actress accolades at the movie’s Venice Film Festival World Premiere. Driver and Alba Rohrwacher (familiar to me from Luca Guadagnino’s remarkable Io Solo L’Amore) play Jude and Mina, two adoring newlyweds who become polarized against one another by the birth of their newborn son. Part Rosemary’s Baby, part Safe, Costanzo’s film draws these actors into the center of a crackling drama in such a way that every scene made me ill, and every grimace pushed me lower into my seat. This is a director who knows how to work with actors.

But Hungry Hearts is much more than the post-Hitchockian exercise its trailer makes it out to be; rather, it’s an almost Dogme-like experiment in thriller, creating in performance and a distorted visual schema (incorporating sickening fish-eye lenses, high-contrast 16mm film coloring work, and extreme Dutch shots) the perfect illusion: that actual horrible events like these happen all the time. Mina and Jude’s son is sickly soon after birth, perhaps because Mom demands that he stay indoors rather than face the garbage, pollution, and modified foods of the outside world. Jude, on the other hand, knows that the boy has to be taken out of the apartment at some point – and his (formerly) absentee mother, played beautifully by Roberta Maxwell, agrees. Despite Mina’s increasingly hostile protestations, Dad and Grandma begin to sneak the baby into New York City, putting his life, and the marriage, into a fragile state.

Costanzo and cinematographer Fabio Cianchetti are not interested in reinventing the domestic horror wheel, but Hungry Hearts wears its influences and its peculiarities equally on its face. Cianchetti bathes lovemaking and squabbles alike in low-key pastels, a keen reminder of Nicolas Winding Refn’s use of color in his neo-neo-noirs Drive and Only God Forgives. As Rohrwacher and Driver circle one another in their quaint New York apartment (such a coincidence that the more vicious their conversations, the sharper the angles!), Cianchetti closes the walls in from cramped to crushing – until eventually Mina, Jude, and their son seem to be living in the trash compactor from Star Wars: A New Hope. The only things really missing are metal objects, which Mina has of course prohibited in their nouveau chic little domicile.

Added to this artful and electrifying mix is an admittedly Hermannesque score by the Academy Award-winning composer Nicola Piovani (Le Chef; Life is Beautiful). Piovani and Costanzo have made a surprisingly musical film for an indie (licensing costs, anyone?), with Driver breaking out into Domenico Modugno’s Italian classic “Tu si’ ‘na cosa grande” in one of his most profound scenes. Like the one in which Jude croons to Mina at their raucous wedding, Hungry Hearts’s scenes are composed in verses, broken by fades-to-black in parallel sequences of around fifteen minutes each. Each new section puts Costanzo’s precision and that of his composer, D.P. and below-the-line crew into higher focus. Together, their work is highly accomplished.

Still, as both a multi-track drama and visually stunning bio-horror, the film gets to the best of its parts, like any great symphony, disparately. What’s gained in keen direction is lost in the plot, with passionate lovers of films noir, Euro-melodrama, and directors like Argento and Polanski who fused the two bound to just over an hour of boredom. Similarly, where Maxwell, Rohrwacher, and the soon-to-be-immensely-discussed Driver impress, other character actors pop up in bothersome expository roles: Jake Weber (Meet Joe Black) as a frowny doctor, David Aaron Baker as another.

Ultimately, though, it’s the explosive chemistry of the three principles and their impressively lush surroundings that makes this film part of that media I referred to earlier: the kind of great pleasure, of revelation, and of process. Costanzo’s work has already been rewarded by several Donatello award nominations, and the film, now available on Video on Demand thanks to IFC Films, will find its niche footing without much strain. Then, you and I will be caught waiting (hungrily, I dare say) for the behind-the-scenes documentaries together.